It’s official. Leica has just started delivering the world’s fastest medium format digital camera, and perhaps the most advanced. When I met with the product managers for the new S (Typ 007) at Photokina, I was in awe of all the technology Leica brought to bear with the new camera, without sacrificing the elegant simplicity that makes a Leica so intuitive to use. Leica has called this Das Wesentliche, German for “The Essentials.” As I’ve noted on so many of Leica’s recent endeavors, the engineers and designers in Wetzlar seem to have this uncanny knack of creating cameras that just feel right, with nothing extraneous or out of place.The new Leica S (Typ 007) looks very much like its predecessor, the S (Typ 006), which in turn resembles the original S2 that was unveiled in 2008. Between the first and second generations were mostly refinements which slightly improved image quality while increasing usability. Sure, there were actually 80 improvements from one model to the next. Taken individually, the changes weren’t revolutionary. The sensor stayed the same. The body stayed the same. But perhaps the biggest updates were hiding behind the new higher res LCD: entirely new supporting electronics and double the buffer memory.

Before faulting Leica for not offering a more significant upgrade with the S006, keep in mind what an extraordinary and unprecedented undertaking the original S2, or Projekt AFRiKA as it was known internally, really was. The German camera company poured tens of millions of Euros into the concept, a built-from-the-ground-up medium format digital system that handled like a DSLR, offered full weather sealing, cutting edge AF performance, high frame rate, excellent battery life, and some of the finest modern design lenses ever produced. And, they did so at the height of the global economic meltdown, when most companies were scaling back R&D and cutting staff.

And yet, everyone in the medium format world seemed stuck on the idea of separate digital backs and cameras. Sure, there are advantages to this approach, such as being able to remove the back and attach it to a view camera or technical camera with movements. But this approach also comes with inherent disadvantages like a lack of weather sealing, alignment issues and much larger cameras.

By starting over and casting legacy aside, Leica was able to create a camera that featured a sensor 60% larger than full frame 35 DSLR, yet handled very much like one, bridging the divide between ultimate quality and ease of handling. With a smaller mirror than analog 645 systems, the camera could be faster and more responsive. As a single, integrated piece, it could be fully weather sealed, smaller and more ergonomic. Ultimately, the S2 proved itself, and continues to do so, as an amazing camera, capable of incredible imagery and as rugged as a tank.

Now with the S (Typ 007), as the third generation S camera body, Leica finessed the ergonomics and physical controls, while dramatically upgrading the inner workings of the camera to offer dramatic image quality and speed improvements. At its core, the S007 features a newly minted Max CMOS 37.5 MP sensor along with the blazingly fast Maestro II image processing engine. If you want to understand the reasoning as to why Leica stayed at the same resolution of ~40 MP and didn’t try to up it to 50 MP, please read my analysis and interviews. In a nutshell, they felt that speed and overall performance were more important than a 10-15% increase in linear resolution. At the time, I saw the logic of this decision, in theory at least.

And now that the camera is released, we can start to see how Leica’s gameplan worked out. The camera is fast and responsive, in a different class from the rest of the field. With a sustained capture rate of 3.5 frames per second, the Leica S (Typ 007) is officially the fastest MFD camera currently available. It also features instantaneous image review and zooming, with no awkward redraws during scrolling, no fuzzy preview images while flipping through a series of shots, and zero hesitation. Everything just feels snappy. Couple this with an unmatched shooting experience, care of the softer and quieter shutter, minimal mirror blackout, amazingly bright and large color-neutral viewfinder, 60 fps live view and great ergonomics, and you’ve got a very enjoyable photographic tool. And lest we not forget that the S gives you access to the most incredible range of lenses ever designed. This isn’t a situation of some good lenses and some great lenses and other meh lenses. All focal lengths are class-leading. Sharpness, detail, color, tonal transitions. All stellar. At every distance and every aperture (up to diffraction point, of course). To quote the venerable Peter Karbe, head of optics at Leica, “The S lenses are the best lenses we’ve ever made. For any system. Ever.” Strong words from the brilliant optics designer who crafted the 50 APO, among other legendary Leica glass.

Leica is also the only camera company to completely reverse engineer two other companies’ lenses to have, not just as much, but more, functionality on the S than on their original systems. The ability to use Contax 645AF andHasselblad HC and HCD lenses is huge. These aren’t dumb adapters. Rather, they allow full AF and auto aperture control, with the S Adapter-H also allowing use of dual shutter functionality, something not even possible when HC lenses are used on their native H body. On an H body, users wishing to use open apertures in full daylight are limited to 1/800th and must resort to ND filters, reducing viewfinder brightness and AF performance. On the S, these same lenses can be used with Leica’s focal plane shutter up to 1/4000th, allowing full aperture shooting.

While not offering AF or auto aperture, Leica also offers adapters for Hassy CF and FE, Pentax 67 and Mamiya 645lenses. Based on my own testing, I’d suggest that if you can spring for a particular focal length in the Leica S version, do it. Nothing matches the optical performance of the purebred Leica optics, nor the convenience of autofocus and the durability of full weather sealing. If you want to play around with different looks, already have a gear cabinet full of classic glass, or are on a tight budget, the adapters make a lot of sense. 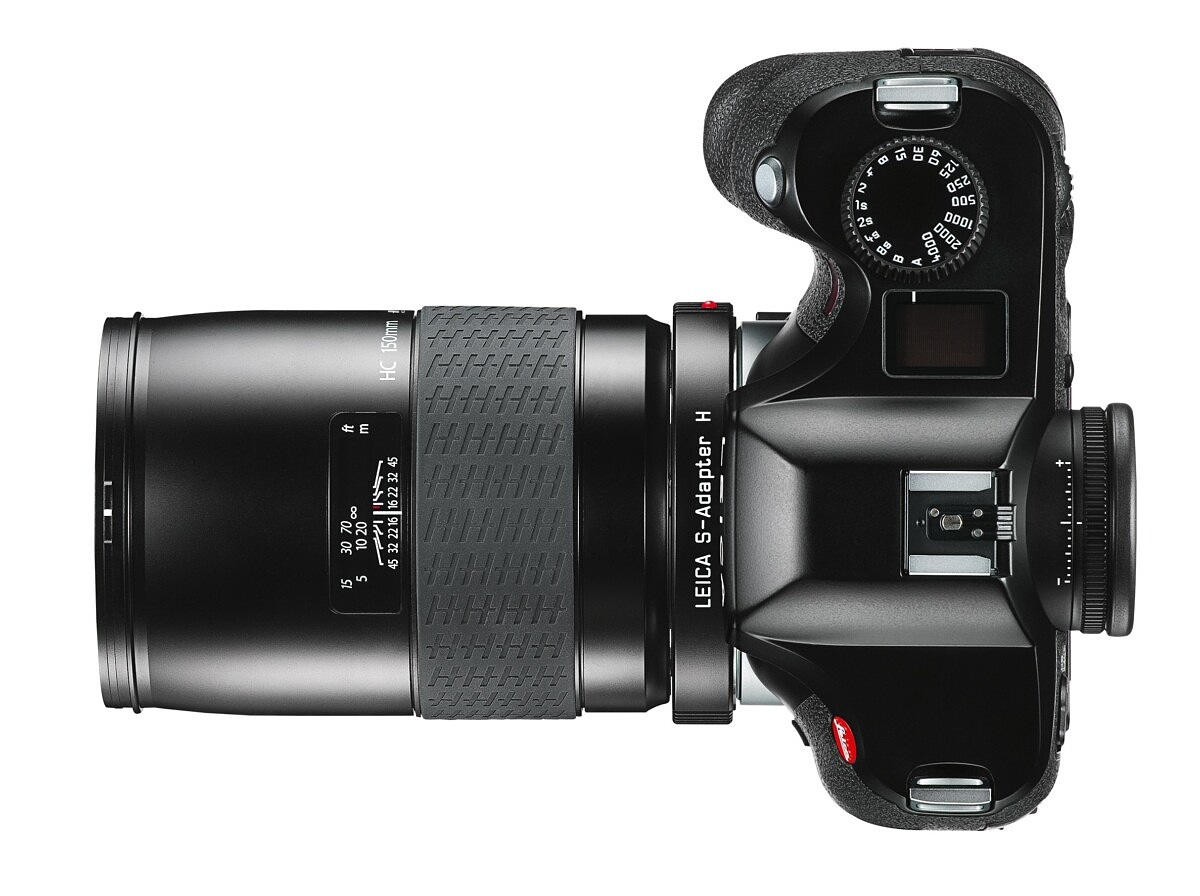 The S-Adapter H allows for mounting HC and HCD lenses. Yes, I know this is an S2, not a Typ 007, but the adapter has been available for a while and works on all S cameras.

While not at the forefront of most still photographers’ criteria, the S007’s video capabilities are a first for medium format. The camera can capture Full HD (1920×1080) using the full width of the sensor at 24, 25 and 30 fps, and Cinema 4K (4096×2160) using 1:1 pixel mapping (Super 35) at 24 fps, all in .mov format (Motion JPG) in 4:2:2 compression. Pairing the extraordinary dynamic range, high ISO capability, and fantastic color of the Max CMOS sensor with the stunning Leica S lenses should make for some truly luscious motion capture. And while Leica is fairly new at video, they did put in some fairly cool features. Clean FHD signal can be sent out via HDMI to an Atomos unit, which can also control the camera. An audio adapter is included in the box, which allows use of an external microphone (Leica recommends Sennheiser), external timecode generation input and a headphone jack for monitoring and playback. I would have really liked to see mini XLR input, 4K output, and RAW video as well, but I’m sure as Leica gets more experience in high-end motion capture, we can expect future iterations to be more feature-rich.

David Farkas is a self-admitted Leica junkie and an avid photographer since he was seven years old. He also owns and operates leading Leica dealer Leica Store Miami in beautiful Coral Gables, Florida with his wife Juliana. David has years of experience shooting with just about every Leica camera and lens made within the last few decades.

Combining More Than One Subject in a Picture

How To Start A Collection

Combining More Than One Subject in a Picture There are three subjects combined in this photograph: the stone bridge, a flowing stream, and some autumn colors....
Copyright 2016 LHSA All Right Reserved.
Back to top
Powered By Ultimate Auction